Serguei (Known as Kong-Bunny) is a giant Gorilla-like-Rabbid and a major antagonist that only appears as the main antagonist in the original Rayman Raving Rabbids and an unseen minor antagonist in Rayman Raving Rabbids 2. he's a large, gray, gorilla-like Rabbid with permanently red eyes and he wears a metal muzzle. he makes low pitched ape noises and apparently used to be the leader of the Rabbids. Despite they're huge body and scary appearance they are very harmless, though this may be because they are not allowed to hurt Rayman. However they is the one responsible for kidnapping Rayman, presumably guarding his cell, and throwing him back in violently afterwards. As the Rabbids soon begin to treat Rayman with a little more respect, Serguei also starts to treat him that way. Instead of grabbing Rayman by his nonexistent throat to carry him out or literally tossing him back in his cell, they pet him on they head and escorts him outside to the Rabbid Colosseum and back inside to his cell by red carpet.

Serguei first appears in the intro of the game and along with the other Rabbids kidnaps rayman by grabbing him to the ''neck'' and taking him to the colosseum. Rayman gets brutaly kicked inside the colisseum by serguei while the rabbids ask for fun.

From day 2 to day 6, Serguei acts rude with Rayman. grabbing him by the ''neck'' to take him to his cell once he finished today's mini-games and throwing him violently into the cell, but also giving him the plunger he just won. If Rayman wants to continue with his tests and knocks the door, serguei will see him through the door peephole and opens the door in order to grab him by the ''neck'' and take him to The Colosseum. Once they're there Serguei kicks rayman into the arena once more so he can continue.

From day 7 to 11 Serguei starts acting more politely with Rayman and with actually rayman's gaining his respect, not grabbing him by the ''neck'' and tossing him into the cell, but going first in order to make sure he opens the door for Rayman. while entering, Rayman tells him to stand firm, Serguei obeys and stands like guarding the cell. If Rayman wants to get out in order to continue with his tests, he opens the door of his cell but there's no one there...except Serguei who suddenly pops up from the other side, waving Rayman. Rayman walks to the arena, while Serguei follows his path like some kind of bodyguard. When rayman gets to the arena Serguei stops following him and returns to the colosseum.

From day 10 to the rest of the game , Serguei prepares a chore of Rabbids with little Rabbids with present boxes that sing, and big Rabbids that use Plungers as trumpets or tubas, while Serguei waves a batuta and dances to the chorists. Rayman goes inside his cell feeling moved for what they just prepared for him. If Rayman wants to continue whit his tests, Serguei tells the little Rabbids to continue singing, while the big Rabbids use their Plungers as trumpets. Rayman goes to the arena while Serguei follows him like a bodyguard, and waving a batuta. Serguei continues following Rayman into the arena while passing some Rabbids who are giving a ''thumbs up'', and other Rabbids who use their Plungers as trumpets.

Serguei also makes special apparitions in mini-games. in Bunnies Are Bad At Peek-A-Boo, serguei is the guard of the cell's door and you have to play his game to win. while Serguei is not looking at you, you must run the stealthy as possible, at one moment Serguei will count to 3 whit his fingers in order to look at you so you must stop when he does this and stay very quiet. if you move or fail with the controlls, Serguei shoots you with his fingers, ''killing'' Rayman and causing you to lose the mini-game, but if you get closer enough to him, you get a cutscene which shows rayman escaping through downside the jail's door before it closes. while serguei tries to catch him but fails.

In the second part of Bunnies Have no Memory, Serguei is one of the rabbids which you must memorize its sound pattern, it's like some kind of evil Dark Vader breathing. If you fail with the pattern of the sounds, or the battery of the camera runs out, Serguei along with the other Rabbids get mad at you, ending the game, but you can still win if you got at least 40 points.

In the second part of Bunnies Have Natural Rhythm, Serguei reappears as an extra character. This time in the intro, he is shown to despise the music so he turns off the radio which plays Girls Just Wanna Have Fun, which the Green Afro Bunnies With Glasses were dancing to. this makes them sad and Serguei starts celebrating in a very mockingly way by jumping and waving his arms like a maniac. Serguei will start guarding the radio he just turned off making sure no one turns it on again and if you get close to him he punches you. so you must turn on a radio quickly and get rid of the most Rabbids as fast as possible, because once the radio is on, Serguei will get mad again and turn off the radio you just turned on, and guarding it just like the yellow one. Serguei is also cappable of knocking down Rabbids when he runs to one of the radios, and also Rayman so this will take one of your lives. once you got rid of all The Dancing Rabbids, you win the mini-game.

After the 15th day imprisoned, Rayman escapes and it is unknown how Serguei and the other Rabbids react to this. Serguei never appears again in any other Rabbids game in the series.

Despite Serguei not making a physical appearence in the whole game, he does appear in the American cover art of the game, where he is seen climbing The Tower Eiffel, as an obvious reference to King Kong. this could also imply that Serguei was involved in the World domination plan of The Second Game.

Serguei Appear On The Box Art in Rayman Raving Rabbids 2 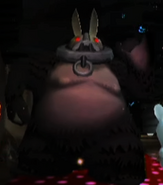