Rayman is running away from eight Rabbids (possibly because they found out he wasn't a Rabbid in Rayman Raving Rabbids 2). Rayman seeks refuge on a farmhouse but the Rabbids are struck by lightning and are sucked into Rayman's TV set, turned into Cartoon Rabbids, they decide to invade each channel. Rayman is forced to watch the Rabbid's programming. The player must play several minigames which parody popular movies and TV shows such as Star Wars, Godzilla, Prison Break, etc... As the player progresses through the game, cutscenes are shown to narrate the game's story. Rayman is being annoyed by the Rabbids' TV antics and keeps making small cracks on the TV. In the end, Rayman is trying to watch a football game, but the rabbids keep changing the channels, which causes Rayman to throw his shoes at the TV, breaking it, releasing the Rabbids. The Rabbids continue to chase Rayman, except for one of them, who stays in Rayman's house and gets a vacuum cleaner stuck to his ears and is too idiotic to tell which a phone and which is an ice cream. The DS version's story is a bit different is that instead of the Rabbids taking over Rayman's TV, its instead TV around the world and Rayman finds his way into the TV world and try to catch all 5 Rabbids.

Rayman - The main protagonist (non-playable, playable in the DS version)

Chef Rabbids - Appears in a commercial as a protagonist (playable)

Up to four players can play the game. In order to beat the game, you will go into Solo Mode and have to beat up to 7 minigames in each day of the week, which drives Rayman each day and forces him to make cracks on his TV. If you manage to beat all of the minigames on Sunday, you will be able to play the bonus game: Megaclicker, which is a big collection of adverts that end quicker. There is a Party Mode which involves 2-8 players to play random minigames and whoever wins a minigame gets to choose, and after beating a select few minigames, there's little microgames like one similar to Frogger and one which to point at the weather icon, if the person beats it, gets to choose the next minigame. If you need practicing on some of the minigames, you could go try out the training mode which you could also play with friends. Also during some minigames, adverts will show up which are like little microgames which consist on flicking the Wii remote to throw a mint in a Rabbid's mouth or shaking the Wii remote to roll pizza dough, who ever wins the advert first gets a boost, easier difficulty, more points, or screen wipes depending on the minigame.

Groove On is a music ''channel'' in which music games can be played. All of the songs are revised and carried out by the Rabbids.

Mighty TV features minigames based on flight and vehicles and deadly risky stunts. It also includes dressing up a rabbid.

Shake It TV features music to dance to, and unlike Groove On, the songs are the original versions rather than 'Rabbids'. From the Trailers, there is a Rabbids Version Of ABC, but the game has the original version with a remix in it. This channel isn't in the DS version.

X-Tam Sports features, as the name suggests, dangerous and ridiculous sports events. This channel isn't in the DS version.

No Brainer channel is a bonus channel that is unlocked after all minigames are completed in story mode. It contains the final minigame: Megaclicker. (Channel Flick) But in the DS version, its not a bonus channel but instead a normal channel.

They are only in the Wii version. During certain minigames. A small yellow bubble will pop up and it will say ADVERT. During this, the player will have to quickly press the 1 button on the Wii remote. When it is pressed, a commercial parody featuring cartoon rabbids will appear and the player will have to quickly do the movement shown on screen with the Wii remote. If you manage to perform the action correctly. You will earn a bonus that will help you in the minigame you are currently playing. In the Trailers, the video end with the Dent-a-fist music (expect for teaser trailer). 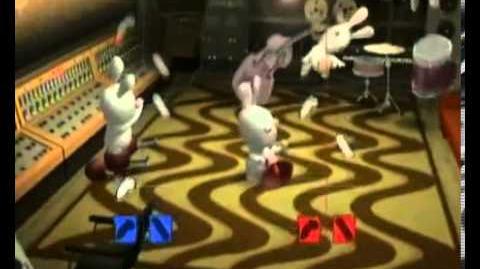 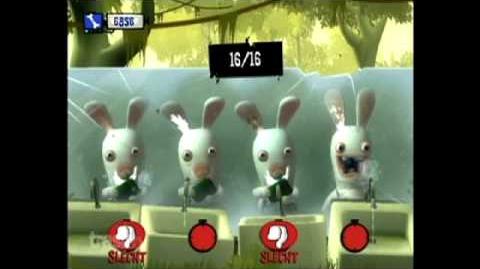 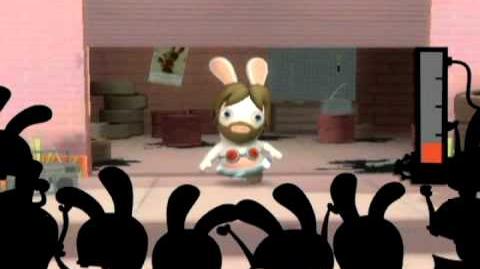 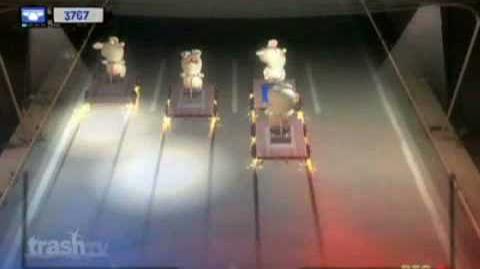 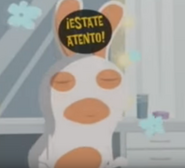