"H Hey" -He's said that when he meet some Rabbids.

Rayman is the main protagonist in the Rayman franchise. He was the mascot of Ubisoft and the main character in the Rayman franchise and the first three games of the Rabbids franchise. He first appeared in the very successful 1995 game called Rayman, and then appeared in other games in the series, such as Rayman 2 The Great Escape and Rayman 3 Hoodlum Havoc. He later appeared as the protagonist in Rayman Raving Rabbids. He's always trying to stop the Rabbids' schemes. He stopped them from stealing the Globox children, taking over the world and taking over his television. In Rayman Raving Rabbids, Rayman and the 3 of the Globox kids were eating at a picnic. But then, the Globox Kids get taken underground and replaced by Rabbids. The Rabbids refused on taking the food Rayman offered. Then, Rayman was taken to the Rabbids Stadium where he would have to play through thousands of minigames to unlock the Globox babies and set them free. In Rayman Raving Rabbids 2, Rayman reappears as the protagonist. He finds out on the news that the Rabbids were taking over earth, So he took out his plunger gun and fought the Rabbids disguised as one. After that, in Rayman Raving Rabbids TV Party he reappears as the deuteragonist or main antagonist. In the opening of the game, Rayman is seen running away from the Rabbids. They get zapped by lightning and then get transported into Rayman's TV. Rayman tries desperate attempts to get rid of the Rabbids, eventually breaking his own TV and getting them out. He's then chased by them again. After Rayman: Raving Rabbids TV Party, the Rabbids have made small cameos in Rayman's games, usually as enemies.

Rayman's main powers are his telescopic fist and using his hair as a helicopter. They are used in most Rayman games.

In Rayman Raving Rabbids 1 & 2, he uses a plunger gun as his main weapon.

Rayman Appear On The Box Art In Rayman Raving Rabbids 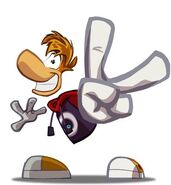 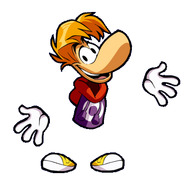 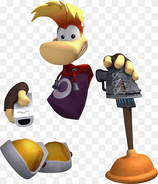 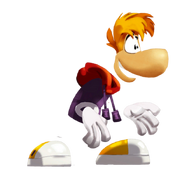 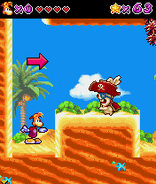