: This article is about the TV series, you may be looking for the Rabbids Invasion (Facebook Game) or the comic. 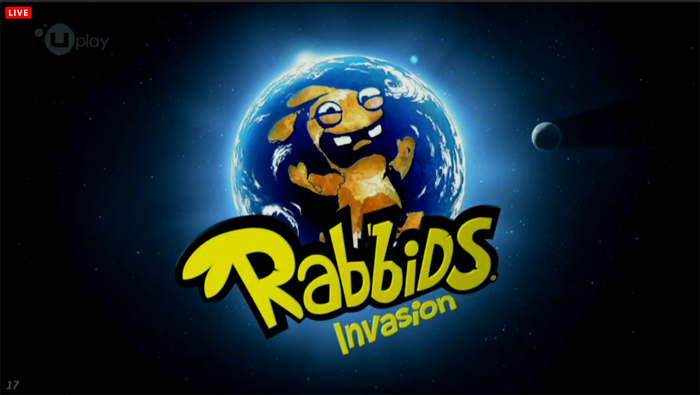 Rabbids Invasion is a television series based on the Rabbids franchise in spin-off franchise .It premiered on Nickelodeon in August 3, 2013 at 11:30 am. It also aired on the Canadian channel: YTV. It is now airing on Nicktoons.

This series brings television to the hysterical physical comedy that is the hallmark in Ubisoft's wildly successful Rabbids video games. Irreverent, unpredictable and silly, the Rabbids are a mysterious breed of rabbit-like creatures that explore and often wreak havoc in the human world. Everything is a source of wonder and amusement, and these indestructible and uncontrollable creatures have no respect for the social rules that govern society. For them, there are no laws, no rules of the road. It's all about having fun and saying "Bwaaaah! and Bye, Bye"

In Season 4, the rabbits take off for new adventures out of the Junkyard, their famous haunt, with an ever-crazier goal: head for Pretzel Island, their new Eldorado, found on the back of a box of cereals. On board their new hi-tech means of transport, the flying submarine, a real place of life, endowed with astonishing technologies, rabbits have indeed the power to go where they want. In addition, they can count on a new tool, the Disguisarium, which allows them to disguise themselves at their convenience and equip them with skills related to their costumes. The rabbits will not be alone during these new adventures: we find Zak and Zoe, determined to help the rabbits to return home, but also the special section that investigates the mystery of the flying submarine, and Otto Torx, the new super villain. Our dear rabbits are not at the end of their sentences ... bwah bwah! The Rabbids embark on an unpredictable globetrotting adventure while making new friends…and new enemies.

Rabbids- The main protagonists. The rabbids are small white rabbits with an unstable mind for causing havoc. They are curious, careless, and complete lunatics. They spend their time by causing hysterical madness with their own creative tastes that often gets them into hilarious situations. Most of the time in each episode, there are four Rabbids. Although they are the protagonists of the show, in some episodes one or more rabbids can be the main villains or can just act antagonistic. (The Nosed Rabbid, Magician Rabbid, Rabbidkhamun)

Louie Clouseau- One of the recurring characters in the series. He is a very old man living along with his wife. He always like to get the job done.

Mona Clouseau- An elderly human lady who is Louie's wife. She is a stubborn old lady who doesn't tolerate excuses. She is often seen wearing white polka-dot periwinkle dress and hair she is usually a minor villain or just a background character, however she is the main antagonist of dueling rabbids.

Fifi- Mona's dog, appears to be a Yorkshire Terrier. She is the secondary villain of Dueling Rabbids.

Brian Lickwood- An young adult with a surfer lingo personality. He first appeared as a hitchhiker in Stop! No More!. He is a lazy freeloader who often bores himself. He is the only human in the series who actually befriended the Rabbids.

Thimothy Gluant- A spoiled fat kid who is usually a background character but is latter the main antagonist of the episodes Scout Rabbids and R.C. Rabbid. He is the quatenary antagonist of season 1 and 2.

John Charles - One of the two main antagonists of the show, he always has a new job and alias until the N°98000 episodes. He and his partner had captured the rabbids a few times. He appears in every N°98000 episode alongside his partner. In N°98001 he fell asleep instantly every time the Rabbids failed the test because he knew the that they would never figure it out anyway. In The Platform, he finds the rabbids comically amusing much to the disapproval of his partner. During the third test he and his partner fight over who gets to push the buttons and eventually break the device resulting in the floor of the lab opening and resetting the test. In N°98004 he highly praises a Rabbid as it completes each test, much to his partner's annoyance as she knows the Rabbid was only lucky, but in the end the Rabbid is rewarded with a donut. He also appeared in The Rabbid Who Fell To Earth searching for aliens after a nearby saucer-sighting, and finds a Rabbid that painted itself green, put a rubber glove on its head, and got a plunger sucker stuck to its mouth. After taking it back to the lab he soon discovers the Rabbid's true identity and leaves the lab angry, but moments later a real alien approaches him that looks almost exactly like the Rabbid's costume, but kicks it away believing it to be another trick, and does not notice as it beams up into a saucer and flies away and later on,becomes crazy like the rabbids

Gina Xenson- One of the two main antagonists of the show, she appears in every N°98000 episode alongside her assistant (see John). In N°98001 she is confident at first that the Rabbids can do the test, but soon becomes frustrated with the Rabbid's incompetence, eventually she becomes furious so her assistant sneaks out the door. In N°98003 she refuses to let her assistant touch any of the buttons and he tries to, she proceeds to slap his hand. In N°98004 she praises the octopus' ability to perfectly execute each test, but becomes agitated by the Rabbid who is only succeeding by sheer luck. She also makes her assistant clean up the dog's "accident" it made when they tested it and in Rabbid Like Me she has Cody pretend to be a Rabbid to study the Rabbid's more closely only for Cody to go crazy and start thinking he is actually a Rabbit, resulting in her getting arrested by Garrett.

Female Rabbid- A rabbid woman. She first appears in the park in Ring! Bwaaah!. Often likes to wear a blonde wig to show her female status.

Rabbid Quatrio- A team of four Rabbids and one of the main protagonists. they first appear on a farm Omelet Party. Like stated above they can be one of the main villains in some episodes.

Rabbid Mozart (Character)'/ Professor Mad Rabbid- is the main protagonist of Season 2, he has a great deal of care for his idiotic friends and usually uses his genius to help.

Ancestor Rabbid/Lapinibernatus - The main protagonist of Season 3. His main goal is to rebuild his time machine in order to get back home to his time period while also dealing with his dumber Rabbid colleagues.

Zak - An alien-obsessed teenager who thinks that the Rabbids are an evil threat and wants to get rid of them, but he isn't good at it and constantly fails.He helps three of them to get back in the submarine in season 4

Alice- a young girl who likes to play with the rabbids and sees their fun side.

Sector-X - a robot who lives in the Flying Submarine and calls the Rabbids masters and helps them.

The relative location of the episode is in parenthesis.

Episode 1 - Mad Rabbid and the Secret of the Flying Submarine

7. Rabbid Clowns/Rabbid and the barbecue of doom/No Costume For A Rabbid

12. The Rabbid Stowaway / Rabbid 000 vs Captain Furious / Night of the Living-Rabbids

15. The Bride of Bwah-Cula / Bwah-Cula's Wedding / The Bowtie And The Rabbid

18. Rabb-Attack/ Jungle Rabbid And The Army Of The Three Crabs /Commando Rabbid

19. Rabbids Vs The Infernal Kitten/The Rabbid Paradox/The Rabbid from the Future

21. Garden Rabbid /A Sub Inside The Rabbid / Rabbid Riddle

23. Rabbid Getaway / The Attack of the Rabbid Flies / Rabbid 000 vs The Son Of Dark Rabbid

Rabbids Invasion- The Interactive TV show is a video game to go along with the show of the same name that will be released on the Microsoft Xbox One and on mobile devices and tablets. The game will allow players to interact in the scenes from the TV show by pointing at the screen, shouting along with the Rabbids and dancing.  A Mobile port of the game named  Rabbids Appisodes was released on October 14, 2014 on iPad exclusively in Australia for the time being.

Rabbids Invasion has received mixed reviews. The show has been highly criticized for both its writing and voice acting, but has been praised for its CGI visuals. Common Sense Media gave the show 2 out of 5 stars while the Internet Movie Database gave the show a 5.5 out of 10. Despite its criticisms, the show remains consistently popular, especially towards children and fans of the Rabbids franchise and has reached 2.6 million viewers in each episode. However despite the show being popular, many fans still did not like it as much as the games. Also, many articles (including Damien Laquet's page) has stated that Rabbids Invasion has become a hit-series and a success.

The series has been released on DVD exclusively in France for the moment, which was a pack containing the first 13 episodes of the series in the order in which they aired in France. The DVD is under the name of Rabbids Invasion-Part 1. A second and third volume were released in 2014. Rabbids Invasion: The Complete First Season (French Version) a DVD of the complete first season is also sold in France currently. Additionally, the series is currently available for purchase from iTunes and Amazon.com in the U.S.A and France.

Retrieved from "https://rabbids.fandom.com/wiki/Rabbids_Invasion_(TV_series)?oldid=22226"
Community content is available under CC-BY-SA unless otherwise noted.