Even though Rabbids do not speak anything decipherable, they communicate with each other just fine by speaking gibberish. This gibberish mainly consists of a sound that is pronounced Squeaks. But there are a very few exceptions to this. For example, on the Rayman Raving Rabbids making of videos they start by saying "aaaaand... action!" as if they were directing a movie. They also say this on one of the minigames in Rayman Raving Rabbids entitled Bunnies are Oversensitive. Also, they seem to be yelling "RAYMAN' when they are cheering for him on the Colosseum. They also sing some of the songs in the first three games of the franchise in English (and Spanish when they are singing La Bamba including Japanese while singing これが私の生きる道). However, this isn't shown when in Rabbids Go Home they are singing a Romanian song in their gibberish language. It's likely that they can still sing in English. And in Raving Rabbids Travel in time they sing the songs the player dances such as YMCA also in gibberish. Sometimes the Rabbids will shout HOLA, which is Spanish for Hi or Hello. 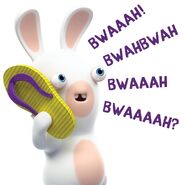 Please note that all of these gibberish phrases may not be written correctly, as they are only written as heard:

List of songs sung in Rabbid language The Russian AnthemEdit

In the official lyric video for the song Make the Party (Don't Stop)  by Bunny Beatz, the pronunciation of some of the sounds the Rabbids make are revealed in the lyrics.

Retrieved from "https://rabbids.fandom.com/wiki/Rabbid_language?oldid=22346"
Community content is available under CC-BY-SA unless otherwise noted.