Rabbids are rabbit alien-like creatures that appear in the Rayman universe. Most of the time, they are antagonists. Their names are a portmanteau of "rabid" and "rabbit". In the previous games, they are called bunnies. They primarily appear in a spin-off series known as the Rabbid series. They are the "anti-mascots" to Ubisoft. Professor Barranco 3, leader of them all since Serguei dissapeared, has one blue eye and one red eye. sucre x is a robot that is in lepes creasen

The Rabbids first appeared in Rayman Raving Rabbids, as the antagonists of the first three games. When they become the main charaters of Rabbids Go Home, however, Rayman was dropped but can be seen in his own games. They also appeared in their TV animated spin-off show, Rabbids Invasion.

Rabbids are chaotic, crazy, and wild, at first trying to take over the world and leaving chaos in their wake, but they eventually abandon the idea to have fun and goof off. They are also very curious, trying to figure out Earth's culture and mechanics. Another of their goals is to go to the Moon, either because they believe that's where they're really from, or they are fascinated by its properties.

Rabbids are also notably very stupid. According to Lapinibernatus (an ancestor of the Rabbids), they were at first very smart a long time ago, but as the ages pass, their brains became significantly smaller and became the dumb Rabbids we know today. However, there are some Rabbids maintain a higher intelligence, such as Professor Barranco III and Mad Rabbid. When they put on a costume or wig, they can take their cosplay seriously, acting like what the costume is based on.

Rabbids are kind to each other, but occasionally show aggression, having fights or showdowns. People and animals can be very annoyed by the Rabbids due to their stupidity and chaotic nature, to the point where animals attack the Rabbids. But Rabbids can attack humans if they're in a "red eye adrenaline rush," where their eyes turn red, their heads shake uncontrollably, and they will yell "BWAAAAAAAAAH!" (or "DAAAAAAAAAH!"). Rabbids love to dance, sing ANY song people can think of, cause chaos, use Plungers, and pull pranks.

Rabbids seem to adore anything that's different, especially if the Rabbid is different. Professor Barranco III was made their leader because he has one blue eye and one red eye. In Rabbid Schnoz, the rabbids followed a Rabbid because he was wearing a rubber nose. When John swapped bodies with a Rabbid in Being Rabbid-part 2, the Rabbids made him their king because he could talk.

In the Raving Rabbids franchise, the Rabbids had no special abilities. Rabbids are really stupid and only a handful are smart. Regular Rabbids are smart enough to create traps and platforms, such as towers, ramps, and rockets to the Moon. The smarter Rabbids can build very advanced technology compared to regular Rabbids, such as Time Traveling Washing Machine and the Flying Yellow Submarine. It is also shown that the Rabbids can survive the vacuum of space, being able to colonize an asteroid belt or the Moon. The Rabbids are shown to be quite strong as the can wrestle without any pain what so ever. Some of the costumes the Rabbids wear can give the Rabbids the characteristics based on that costume.

In the 3 Rayman Raving Rabbids series, Rabbids have an ability to "sing" in English or even Spanish. They can even sing songs from famous artists such as Amy Winehouse and Queen. This was not shown in Rabbids Go Home, due to them singing Romanian songs in their own gibberish language, but it's possible that they can still sing in English.

In Hungry Shark Evolution, there is a baby called the "Rabbid Shark," which is a Rabbid in a shark costume. It can be implied that Rabbids can breathe underwater due to their tendency to take their cosplay seriously, but is non canon to the real franchise. This baby can stun enemies by shooting a plunger at them with a plunger gun.

In Mario + Rabbids Kingdom Battle, the Rabbids merged with the SupaMerge goggles gained many abilities, such as flight, enhanced jump, enhanced strength, ice/earth powers, and many others. The Rabbids that were dressed as Mario, Luigi, Peach and Yoshi had special abilities that help them in battle, such as healing, protection or added damage. Those Rabbids and some of corrupted Rabbids were given blasters, bombs and mallets that can destroy platforms or damage other Rabbids.

In Rabbids Crazy Rush, Rabbids can jump high and run fast, and depending on the outfit your Rabbid is wearing, it can have enhanced strength, enhanced jump, or twice the cans.

Humans have grown accustomed to the Rabbids and accepted them as a relatively normal part of life. In general, most people hate the Rabbids and consider them to be very annoying and rude. They get very annoyed at the Rabbids due to their stupidity and shenanigans. However, there are some people that like the Rabbids and help them whenever they're in trouble, such as Zak and Alice. The Rabbids don't really think much about the humans and cause often havoc in the lives of humans unintentionally. The rabbids do show sympathy towards them whenever saddened.

Rabbids are a mystery to the government and don't know their true intentions at all. In Rabbids Invasion, the scientists performed special tests (which the Rabbids always fail) to gather data on their intelligence. In Season 4, The Special Unit becomes suspicious of the Rabbids and their flying submarine, believing that the Rabbids are going to take over the world by mistaking Otto Torx's map and domination plans for the Rabbids. In Rabbids Go Home, the Verminators try to kill the Rabbids and bring back their stuff that was being used for the tower.

Most animals try to attack the Rabbids if they annoy the animals too much or by natural instinct. Some animals are tamed by the Rabbids and become their pets/livestock, such as chicks, chickens, and even a Doberman. 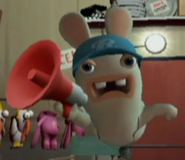 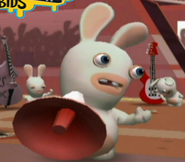 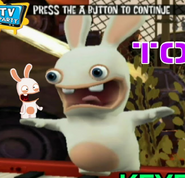 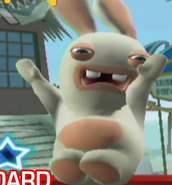 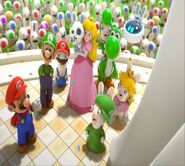 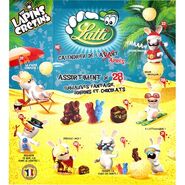 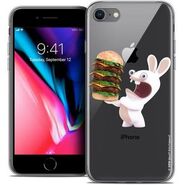 A Rabbid with a fork

Add a photo to this gallery
Retrieved from "https://rabbids.fandom.com/wiki/Rabbid?oldid=21797"
Community content is available under CC-BY-SA unless otherwise noted.