The rabbids become fascinated with the process of how chickens lay eggs.

The Rabbids are fasinated with chickens' ability to lay eggs, and they decide to have some fun!

Four Rabbids are walking down an unpaved road. #1 decides to trick #4 and stops walking, allowing #4 to bump into him. Just as he gets up they hear a clucking noise, a brown chicken. The four rabbids proceed to walk in a circle around brown chicken, imitating the chicken's actions. When the chicken starts to walk away the Rabbids stop (except for #4, who walks right into #1 for the second time). When he gets up, he sees the others are gone, feeling left out, he glumly walks around the chicken coop. #4 hears another chicken in the coop and "sings" it a "song", which the chicken repeats and lays an egg. #4 wonders what it is so he decides to show the others, but he trips over a rock causing the egg to go flying at #1. Seeing its egg hit the rabbit causes the chicken to faint, but #3 & #2 laugh at #1. #1 grabs a chicken and challenges #4 to an "Egg War". While #1 &#4 watch, #2 donns a helmet and the Rabbids fire eggs at each other, which #1 shows ninja-like abilities, such easily dodging eggs and running along the wall of a henhouse. At first #1 seems like he's going to win, but as he tries to finish his #4 he discovers that his chicken is out of eggs, allowing #4 to gain the upper hand. He runs into a chicken coop and takes an egg from a nest, using it to ambush #1, only to find that upon throwing the egg it hatches. The newborn Chick believes the #4 is its mother, to his annoyance and the other's amusement. The rooster approaches scaring the Rabbids, so #1 & #4 put the chick back in the egg and the egg back in the chicken, this only makes the rooster angrier. The Rabbids run into a pasture full of cows to hide. #4 wants to try another egg battle so he sings the communication song to a cow while the other Rabbids wait by the rear end of the cow, only for a face of manure.

The episode ends with #1 screaming "BWAAAAAAA!". 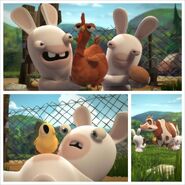 Add a photo to this gallery
Retrieved from "https://rabbids.fandom.com/wiki/Omelet_Party?oldid=23735"
Community content is available under CC-BY-SA unless otherwise noted.