Fast Food Rabbid is the 13th episode of the first season of Rabbids Invasion. It aired on Nickelodeon alongside Rabbids Against the Machine and Ring! Bwaaah!

Two Rabbids discover a fast food intercom and are convinced that their leader is trapped inside.

The episode starts with a Rabbid being happy and then sad when a fast food restaurant, Kakins Burger sign turns off and on. A trucker drives by, but because the speaker is broken, he enters the restaurant while two Rabbids get out of his truck. The first and second one go with a third one who wears sunglasses. This Rabbid acts as their leader. The two of them get distracted while the leader goes away. They then think that he got trapped in the broken speaker, while actually that Rabbid is in the truck with the man, who got a large double cheeseburger from the restaurant On the road, in the truck, the man reaches for his cheeseburger, but sees that the Rabbid has grabbed it. The Rabbid then looks up and laughs at the man before eating his burger in a single bite. The man grabs the Rabbid by the ears, but the Rabbid merely burps and gives a relaxed sigh. The man then throws him out of his truck, angry at losing his food. The leader crashes against a large pole and laughs as he slides down. The other Rabbid then gets distracted the same way the first one did. They then finally remember what they heard. The first one doesn't believe the second one and tries to look for him. Until he starts to think he really is trapped inside. They try to destroy the speaker, but fail. The leader then comes back to them. He grows angry with how the others were alone without him, and orders them away. However, at that moment, the light on the speaker then starts to glitch, distracting all of the Rabbids. The Rabbids speak in tune with the speaker's buzzing as the episode ends. 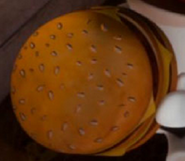 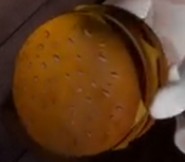 Add a photo to this gallery
Retrieved from "https://rabbids.fandom.com/wiki/Fast_Food_Rabbid?oldid=20616"
Community content is available under CC-BY-SA unless otherwise noted.