At the Ubisoft Press Conference in 2010, it was announced that a shooter/horror survival game was in development. This game was originally going to be part of the Raving Rabbids franchise. It showed the Rabbids as more aggressive and disturbing than the original Rabbid design. However, since the Rabbids were targeted at younger audiences, the idea was scrapped and became Killer Freaks From Outer Space, later in 2012, the entire alien invasion premise was scrapped and was turned into a zombie survival game for the Wii U known as Zombi U

The development of the game started in 2010. Ubisoft Montpellier, who also worked on several Rayman and Rabbids games, was in charge of the project. It was meant to be a first-person shooter and survival horror game, and the release was planned for Xbox 360 and PlayStation 3. Although the game was cancelled, a substantial amount of concept art was created. It depicts a post-apocalyptic Earth under attack by extraterrestrial monsters related to the rabbids, although they did not originate from the Glade of Dreams. Their appearance is also significantly more gruesome, with yellow eyes (or no eyes at all), sharp teeth, clawed fingers and a tail like that of a rat. Killer rabbids mastered an advanced technology, including rayguns, flying saucers and war machines. Unlike their regular counterparts, their violence was not mitigated by the cartoonish tone of the game and they would not hesitate to savagely kill humans. In addition to the common alien rabbids, the game featured other types of enemies, such as a larger rabbid equipped with a whip, or gigantic rabbids. The player would control a human fighting killer rabbids with various weapons, whether realistic (revolver, shotgun) or fantasist (electric gun, freeze gun). The presence of several humans in the concept art, from two to four, suggests that the game may have featured a multiplayer mode. However, the developers eventually rejected the idea of monstrous rabbids, fearing it would harm their public image, and replaced them with different aliens, renaming the game Attack of the Killer Freaks From Outer Space. The new enemies, called Freaks, were smaller than alien rabbids, with a reptilian—and less cartoony—appearance. The game would take place in a devastated London, with a confirmed multiplayer mode, a "run and gun" gameplay and a scoring system. The release was planned for the Wii U, as a launch title. The developers however still weren't satistfied, as the Freaks' small size forced the player to constantly watch the ground. Moreover, the game made little use of the Wii U's GamePad. Eventually, the alien attack was replaced with a zombie outbreak, and the game became ZombiU, released in November 2012. It is also a first-person shooter and survival horror game, takes place in a post-apocalyptic London, but the final gameplay makes ample use of the Wii U's GamePad. 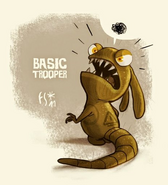 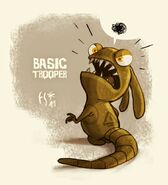 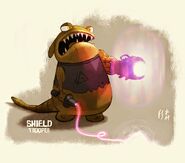 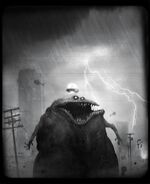 Add a photo to this gallery
Retrieved from "https://rabbids.fandom.com/wiki/Attack_of_the_Killer_Rabbids_from_Outer_Space?oldid=26839"
Community content is available under CC-BY-SA unless otherwise noted.